January 26th, 1996 my nephew was born 3.5 months early by emergency c-section.  The placenta had ripped from the uterus cutting off his oxygen supply.  His due date was not till May!!!  He was 1pound 13 ounces.  The doctors did not think he could make it the firs 24 hours.   It was a very scary thing for the whole family but my perspective at the time was different since I did not know all the facts.  I was only in 6th grade at the time.  I just knew it was not good.


He made it the first 24 hours and he has not let things stop him.   He has had several surgeries and battles to overcome.  He was diagnosed shortly after being born with Cerebral Palsy.  There are several different types of it and he has the tightening kind.  His muscles are so tight that it prevents him from doing many every day things.  He is in a wheel chair and his motor skills are low.  His communication skills are pretty good, but for new people who meet him they would struggle to understand what he is saying.


He is a fighter, he is a joyful kid, he is handsome, and he has a huge heart!  He has taught me a lot, especially when I was younger he taught me many things.  He was the reason I became a special education teacher.   He will give you tons of smiles just minutes of waking up from surgery!  He can give you one big smile and anything that happened that day disappears!


HAPPY BIRTHDAY DEVIN!!!  Your auntie loves you very much!!!!  xoxoxoxoxo 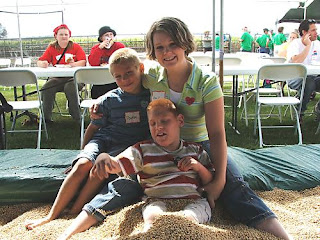 My brother took this one a couple years ago.  He is a photographer http://jwnvisualaddictions.com/ 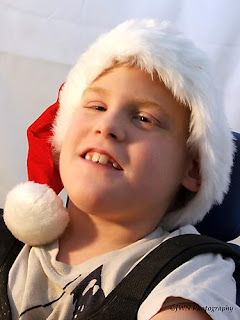 Here is the short story my mom wrote:
It seems so long ago, but it has not even been a year. That one winter morning, January 26, 1996, that our family's lives were changed forever. One of the Lord's precious little miracles, Devin Walter Norden was born.
My son, Jason called me at 5:30 a.m. to tell me Sandra, his wife, was in premature labor. She was only 25 weeks along in her pregnancy, so I knew this was very serious! I told him that I would drive him to St. Paul Ramsey Hospital, because they were going to fly Sandra there. I picked him up at the Baldwin Hospital. There was a change in plans, however. Instead. we were to follow the ambulance there. The doctor felt that the Life Link Helicopter would take too long to get to Baldwin.
The day was cold, and the roads were icy and snow covered. It made driving quite a chore, with trying to follow the ambulance and watching out for traffic. Jason and I held hands for a moment and prayed on the way there. We arrived at the hospital a few minutes after the ambulance. We ran as fast as we could to the emergency room. The doctors and nurses already had an ultrasound on Sandra's abdomen. Devin was not only breech, but the placenta was erupting from the uterus. The only thing they could do was a cesarean; at least Devin would have a chance. They wheeled Sandra away to the operating room. Jason and I were left behind to wait. We felt a lot better after that. Around 45 minutes later, one of the doctors came out and told us Sandra had lost a lot of blood, but she would be fine, but Devin they weren't so sure of. He was still alive and the put him on a ventilator, which breathes for him, but he was so small. We waited hour by hour for updates. The nurses told us that if he survived the first 24 hours, his chances were that much better. It all depends on his will to live.
My husband, Barney and our oldest daughter Kelly, who is 17, drove up as soon at they could. My youngest daughter, April, who is 12, was still in school, we didn't want to alarm her. Devin was still critical, but stable. He weighed 1lb. 13oz. and was 12 inches long. We went to see him. He was so fragile, his skin was transparent, and you could see all of his veins clearly. His hand was about as big as my thumbnail. We didn't want to stay in there long because the nurses were very busy taking care of him. Sandra was wheeled in Devin's room later on in the evening. She touched his hand and his fingers tightened over hers. On the way back to her room, she passed out. She was very weak, but the understood her special need to see him.
We left for the night utterly exhausted, emotionally and physically drained to the very core. Jason told me he was going to take a nap and would call me later. About 2 hours later, he called to tell me he had the most wonderful dream. Sandra and Jason were in a room at the hospital and they brought Devin in to see them. Jason got to feed him a bottle and he smiled at Jason. He woke up then. I told him that the Lord gave him that dream as a sign that Devin would be okay. I told him to read Psalm 91 because I felt the Lord wanted us to stand on that word. We both started to cry. The last line says, "With long life will I satisfy Him and show Him my salvation." From that night on that was Devin's Psalm. The Lord also gave me a poem in the middle of the night; I wrote it down and brought it to the hospital the next day. The Holy Spirit was comforting us in many ways. Devin was born January, and for a Christmas gift, April had given me a calendar. Every month had a Psalm on it. I flipped it to February and on the backside of January was Psalm 91. There are 150 Psalms in the Bible and 12 months in a year, what are the chances of that happening? The Holy Spirit kept telling me Devin would be fine. He has had many problems, but has come through them all fine. He has had 2 brain surgeries, hernia surgery, and laser eye surgery. He came home on May 1, 1996 weighing 4 lb. 6 oz. {A week ahead of schedule}. The doctors say he still can develop many problems, but now he is 12lb. 6oz. and is 22 1/2 inches long and is doing wonderfully. God does answer prayers. He is still the same yesterday, today, and tomorrow; so don't give up on your miracle. Just believe you receive and you shall have it! One of the Lords' littlest miracles turned out to be one of the lords' biggest blessings!