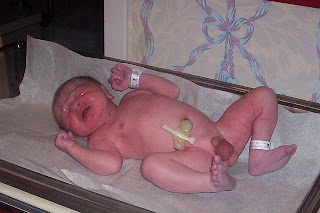 With my second baby (that was the result of a brief reconciliation with my husband) I knew from the beginning that I would not leave my home in labor. I found a local midwife and she was the perfect fit for what I was looking for. We instantly clicked. She was able to help me manage the severe sickness that hit me like a ton of bricks. She worked well with my GYN as we treated the HPV that resurfaced again. I had the pregnancy that I wanted (with the exception of a supportive partner). I was left alone to grow a healthy baby. I had one test for HIV as mandated by law and that was it. I didn’t even have an official pregnancy test. I had to sign a lot of waivers for this to happen but at least this time for me I was aware that it was an option.


My appointments were at my home. My midwife came to see us and it was like having a girlfriend over for coffee. I was completely relaxed and in tune with my body and baby. I did not have an ultrasound so I didn’t know what I was having. Well that’s not true I had a gut feeling that it was a boy, and I was right! From my previous birth in the car and the education I received in my Bradley classes I knew what my body was going through and what it was capable of handling. So I just waited for labor to start.


I expected to go into labor about week 37 like I had before and I had some signs around that time but they went away. My body was completely quiet for about 3 weeks. When I did go into labor it was a Thursday evening and I was sitting on an exercise ball watching the Vice-Presidential Debates. My back had been bothering me for about an hour before hand but I didn’t realize that it was labor until I stopped and felt that it was wrapping around my whole belly. So I went to my room, laid down and hopped on the computer to time my contractions: 7 minutes apart, lasting for about a minute each time. I called my midwife and literally said “Anne” and she was out the door and on her way. Then I called my mom because I wanted her to be there for my oldest son in case he woke up and was nervous or scared.


My labor was a hard 4 hours. But short labors and posterior babies call for such things. I spent most of my time either in my dark room on the ball on in the dark bathroom on the toilet. When I finally emerged it was only to get in the birthing tub. The water felt cold to me, and I really couldn’t get too comfortable, but I was already in transition so I figured it was moot to try. Just about the time that I started wishing to push my body followed suit and took over. My body started to push and it was a very unique and earthly feeling. After 4 pushes I had to stand up out of the water because my baby was stuck. Actually he was trying to turn around the “correct” way. But I just thought he was stuck so I pushed with all my might and as a result he was born with a fractured clavicle. It healed within 3 months but I still felt a little guilty.


It took about 20 minutes to find out if it was a boy or girl. I hadn’t thought to look and it was my mom that pointed it out. Right after that my oldest son came out of his room. He looked at me and said “My baby mommy! Where’s the other one?” Then he asked to see the placenta, something he’d been obsessed with my entire pregnancy after I read “Welcome with Love” to him. I couldn’t believe that I’d birthed at home.


It was such a wonderful feeling to get in my own bed and nurse both my boys shortly after the birth.  After about an hour we weighed the baby and he was 8 pounds and 21 inches long and the spitting image of his big brother. When I sent pictures out of him everyone kept asking why I was sending old pictures of my other son. The pediatrician came to the house a few hours later, while my oldest son watched Sesame Street. Then we all went to bed. My new miracle was a little jaundiced and a lazy eater.  I would have to nurse him completely naked while thumping his foot to get him to get full. And when my milk came in 18 hours later I was happy to have a nursing toddler to help with engorgement. Aside from a quick trip to the ER with my midwife for stitches my second birth was almost perfect. It definitely healed the resentment and hurt I had about my first birth.

Don't forget to visit her at her blog:

Romina Garcia said…
Beautiful post!
Awesome blog!
I'm your new follower on GFC.
So glad I found you with the hop!
You can reach me at:
http://rominagarciamartyrhood.blogspot.com/
March 16, 2011 at 5:45 PM

annies home said…
what a great post nothing more wonderous than giving birth with so much love around
March 16, 2011 at 6:36 PM

Style, Decor & More said…
Lovely blog!
Newest follower from the hop!
Hope you can follow back!
http://stylendecordeals.blogspot.com/
March 16, 2011 at 6:57 PM

Anonymous said…
I heart your blog!!! I'm a new follower from wed. blog hop. please visit whenever you get a chance.
Naomi
http://misoglamorous.blogspot.com
March 16, 2011 at 9:13 PM

Anonymous said…
April, I just wanted to say thanks so much for letting me share my stories with your readers!
March 16, 2011 at 9:22 PM