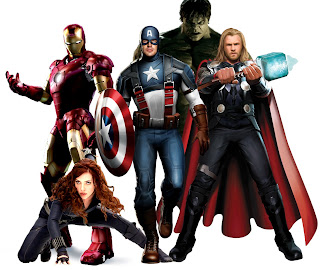 Yes I know that this movie debuted weeks ago but to be honest we do not go to the theater very often, but since everyone was talking about this movie and it was our anniversary we thought we would go and enjoy it!  And we both did!!!


The night before going to The Avengers we found Thor on netflix.com   I do have to say that both movies were great and I am glad I watched them in order.  :)


Everyone has heard that this movie grossed 200 million dollars it's first weekend in the box offices so it is no surprise that I felt I was the last one to see it.  LOL


So what did I like most about it?  First, let me just say that the car ride home with my husband we were discussing all the parallel links to the movie and the Bible!  :)  Very neat!  One line that I absolutely loved hearing was "There is only one God, Ma'am, and I'm pretty sure he doesn't dress like that."   The other line I liked was, "Have you heard of the story about Jonah."  :)  2 lines in a major motion picture that made me happy to hear!  :)


Beyond the two lines mentioned above I thought there were tons of other things within the movie that could be related to the Bible.  For one Thor- he is such a sweet guy that no matter what is ready to forgive his brother who was the bad guy!  That is true forgiveness-just like us we are full of sin and do not deserve God's forgiveness but God loves us so much that he forgives us!


Another thing is Ironman- at the beginning you see him as the selfish "hotshot" where everything was about him, but at the end he becomes selfless!  He became the hero and I am happy he did not die! He was willing to die to let others live- again Biblical - NLT  John 15:13 There is no greater love than to lay down one's life for one's friends.


Next team work!  When the Avengers finally realized they should stop fighting and work together it reminded my husband of Psalm 133-
1

How good and pleasant it is
when God’s people live together in unity!
2 It is like precious oil poured on the head,
running down on the beard,
running down on Aaron’s beard,
down on the collar of his robe.
3 It is as if the dew of Hermon
were falling on Mount Zion.
For there the Lord bestows his blessing,
even life forevermore.
I also liked how they finally allowed Captain America to LEAD.  He did a great job and when they had good communication they got the job done!  :)
On to humor, there were several good laughs in the movie.  One laugh for me was when The Hulk picked up Loki and was beating him from side to side and then said, "puny God."  :)  LOL
On a positive note the movie did not show much blood and NO SEX!  YAY!  :)  In fact I do not feel like there were any issues with provocative ladies and or men in the film.  Two thumbs up from me! :) My husband actually had to explain to me that the lady-black widow was a seducer and murderer... so if you do not know the comics very well then you have no idea of her past.
Now lets talk action!  It is always fun to watch shows with action and there was atleast one time where I jumped out of my seat due to the Hulk scaring me.  LOL, I know I know... kinda a baby here.  :)
So have you seen it?  I hope I did not ruin it for you if you are waiting for it to come out on video.  Still go see it because it is great!
Is there any other things that you enjoyed about the film?