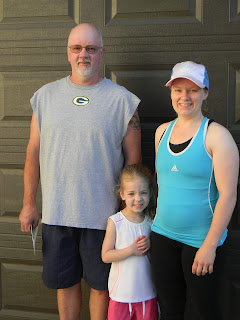 So I did it!!!!!!!  I ran and finished my first 5K race!  I set a goal to run it under 30 minutes and I smashed my goal!  :)  I ran it in 28:29!  I had some doubt in the race about finished in under 30 minutes.  I did not train much and running outside is much different then inside.  I tried to find a person to trail behind with a good pace but at first it was tough everyone seemed to be running at a faster  pace then I was used too.  The course was not terribly difficult but it was humid out and there was a slow incline as we headed out on a country road with no shade.  Then once we got half way the wind started to hit us.  It felt good to have a cool breeze but I felt I was slowing down.  Overall my mind was doubting but my heart was cheering "go go go."   :)  I am sure I can beat that time next time too!  :) :)  Not only was I pleased with my performance but my dad too!  It was a shocker to see him on the course still running, and only about 2 minutes behind me!  Now my dad has not been "training" for a race but he has been working out since February 3-4 times a week.  :) So when he finished at just over 32 minutes I was so excited for him.  It was neat to hear him excited to do it again!  ACCOMPLISHMENT!  I understand better why people run marathons or other races because the accomplishment when you finish the race is addicting!  :) My dad and I are planning on running that race again next year with goals of beating our old times.  Who knows maybe my dad will beat me since he is retired he has lots of time to train!  :) 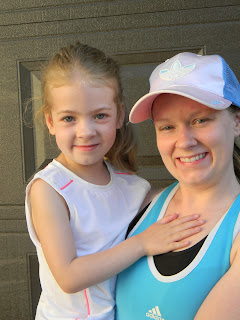 Not only was I proud of my father but my daughter!  She had to overcome some fear to actually run her race.  My daughter has had this fear her whole life of anything in a costume to the point of shaking and crying!  Well right as the kids were about to start their race a person dressed in a "bee" outfit came out to run with the kids.  Immediately my daughter was grabbing my hand and telling me she was scared.  I knew she was so excited to run this race so to ensure she would start and finish the race I ran with her! :)  Yes, I ran another .5 mile after a 5K but her pace was a great cool down for me!  :) 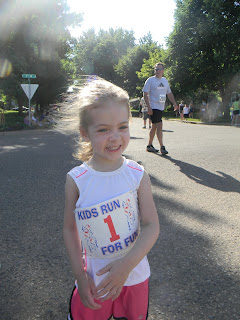 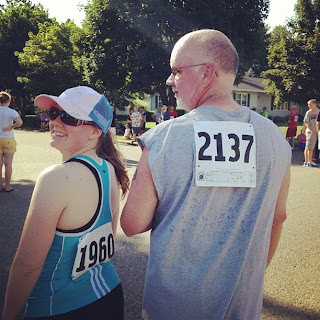 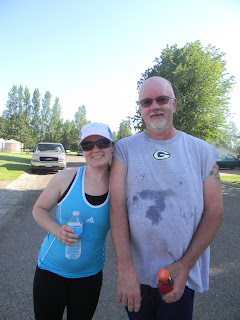 Me running and cheering my daughter on! 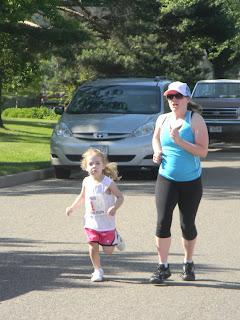 A little scared but SHE DID IT! Now she is loving telling everyone that she ran a race!  :)  She is proud and she wants to run more now if only we can help her work past her fear of people in costumes. 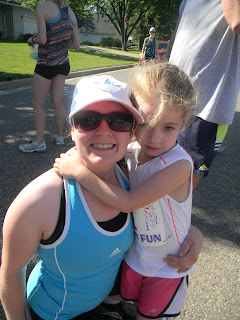 Have you ever run a race?