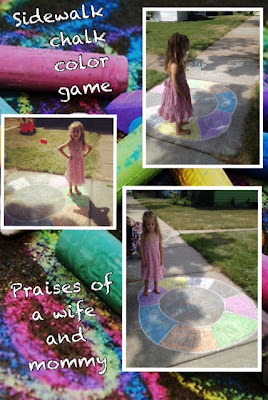 Thanks again to Pintrest where I found this idea from Toddler Approved.  We love fun ideas for outside and chalk!
My daughter never has played "Simon" so I called our game the Color game.  We played it similar to  "Simon" but my daughter is only 4 so trying to get long sequences was not the goal.  I also used 8 different colors so my goal was to sequence the 8 colors.  I would call out a color and she would jump on it then back in the middle.  Next I would say the same color and add one more and she would jump from one color to another and then back to the middle where I would add another color.  We would do that similar to "Simon" but we did not repeat a color so we would use all 8 colors  once.  She did a fantastic job of remembering where to go and each new color when it was added.   :)
This game was played several times for at least 45 minutes!  :) Yay!  My 16 month old also had fun trying to jump on the colors, trying to copy his sister.  I also took a turn and allowed my daughter to call out the colors for me

Cheerios and Lattes said…
Great games! Thank you for sharing this at Saturday Show and Tell. I can't wait to see what you have for this week! I look forward to seeing you there.
-Mackenzie
http://www.cheeriosandlattes.com
August 2, 2012 at 11:45 PM