Perplexus: The Rookie *Review and Giveaway 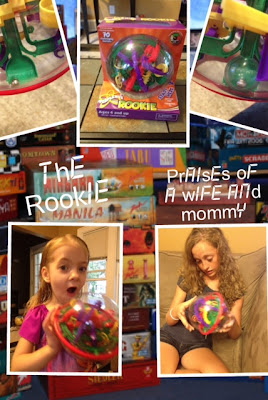 Who likes a good puzzle or brain teaser?
Thank you Perplexus for sending me "The Rookie" to conduct my review and the winner of the giveaway.  All opinions are 100% mine.
The designer of the Perplexus came up with the design back in the 1970's!!  It took many years before it finally found The KID Group where it was licensed and finally set for production.
There are 3 models which include "The Original," "The Rookie," and "The Epic."
The mailman came and dropped off this surprise earlier this week.  :) As soon as I took "The Rookie" out of the shipping box my daughter saw the bright colors and I think she was drooling with anticipation of playing. Since she was all ready for bed I the nice mom that I am let her have 5 minutes to play before tucking her in.
At first she just had fun looking at it and watching the ball fall all over the place.  After I let her investigate for a little bit I took "The Rookie" and showed her the "start" and "end" space in the ball.  Then I had a hard time giving it back because I wanted to see if I could get it to the
"End" my first time.   NOPE, no success on round one, two, three was kinda successful but the ball somehow magically skipped a little and ended in the "end" spot.  ;)
I then let my daughter take another try.  She was having fun even if she never kept the ball on the track.  The suggested age on the box said "ages 4 and up."  I think for my 4 year old daughter her hand/eye coordination are not strong enough for this game.  Perplexus is a good tool to help Child Development by having them practice their motor skills and dexterity along with hand eye coordination.   I'm sure that other four year old's would have no problem while others would loose concentration too quickly.  The neat thing about my daughter is she never once showed frustration!  It did not matter that she was not on the track and doing the actual puzzle.  She was still having fun!  :)  So I think this might be a great toy for a road trip.  :) Good for her to play with but also good for mommy to have some fun too! :) The car ride might make it more difficult but I think my husband might be up for that challenge.  I am going to keep an eye on my daughter and see how she improves over time!  :)
After I put the children in bed I had the youth group over for a movie night.  I left "The Rookie" on the table in hopes that someone would try to play with it.  Well, the first couple people arrived and I walked out of the room and walked back in and one of the girls was already playing.  :) She said it was fun and addicting and frustrating because her ball kept falling too.  Overall it was two thumbs up!  :)  I know that "The Rookie" is going to end up at youth group for some sort of challenge.


I like that the ball comes with a "holder."  If you want to take a little break you can put the ball on the nice holder and it will keep your place for you as long as you are in a good safe place.
I know when my husband gets home (out of town on business) he will not be able to put the game down till he has success.  So this should make for a very interesting time.  I imagine there will be frustration, laughing, and success!  :)


**Update**
My husband has successfully completed the puzzle.  It only took him a handful of tries and I don't even know how many times I have attempted and failed.  My time is coming!!
Check out http://perplexus.net/ to read more about "The Rookie" and to find a location near you to buy one.  :)
Also find them on Facebook and Twitter.
Enter through the rafflecopter form below.   If you have any questions about entering please let me know.

Jonnique said…
Love your Godly heart& your blog! Newest Follower via bloghop! Would love for you to follow back!?
July 23, 2012 at 9:00 PM

Big K Fam said…
Love this! I'm your newest follower from the Monday Mingle, and I'm excited to get to "know" you!

Martin Meyers said…
Hey there! Just wanted to let you know that I’m the newest follower of your blog via the hop, and I’d also like to invite you to check out an Amazon Giftcard Giveaway I’m having right now!

Hope to see you there, and thank you!