By Praises from a Wife and Mommy! July 31, 2012
Yes, you read that right!  PLUNGER!!!  We have a baby plunger that we found at the dollar store that is not used for toilets...just wanted to clarify that!  The plunger makes great circles so we made the Olympic rings with it. 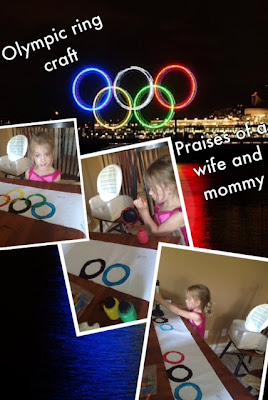 Before doing the project I wanted to discuss the history of the Olympic Rings.  So we sat down on the computer and I shower her some google images of the rings.  We pointed out each color and that every national flag in the world includes at least one of the five colors.  I also got a map of the world so I could point out each region because the five rings represent the five major regions of the world: Africa, the Americas, Asia, Europe, and Oceania.   You can make this more detailed for older kids or keep it simple with color recognition.
In order to make the rings my daughter had to find the colors from the picture.  We did not have black paint so we used glue and black glitter.  Then my daughter would look at the picture and pick the color she needed and painted the bottom of the plunger.  The she used the plunger similar to a stamp.  We made two Olympic rings since we had enough paint on the plunger.
We did make a mistake with the position of the green and yellow circle but I asked her what color was next and she kept going clock work instead of going back to the left hand side.  OOPS, mommy should have double checked!

Anonymous said…
What a creative idea! My daughter would go crazy for this as she is loves anything that takes art and pulls it outside of the box in terms of thinking. Thank you for pulling up a chair and sharing this on my Saturday Sit Down Link Up. I have pinned this onto my Olympics Pinterest Board.
August 5, 2012 at 9:38 AM

Unknown said…
I love the disclaimer at the top. Of course some people will assume the worst. ;) This looks like a great time! Thanks for linking up to The Sunday Showcase.
August 11, 2012 at 12:02 AM