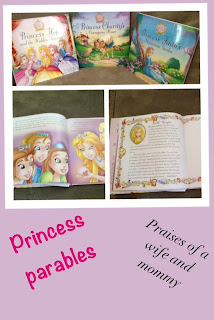 ZonderKidz did it again with publishing 3 new awesome books!  The Princess Parables are available for purchase!  Jeanna Young and Jacqueline Johnson wrote two of the 5 Princess Parable books two years ago but this year wrote 3 more to complete the series.

So what is a Princess Parable?  Each of the books tells a story of one of the 5 princess sisters but also corresponds to a Bible story. The princess's include studious Princess Faith, the adventurous Princess Charity, and Princess Hope, the responsible first born.  Each story is fun but is filled with biblical values and lessons.

The three books that I reviewed include, Princess Hope and the Hidden Treasure, Princess Charity's Courageous Heart, and Princess Faith's Mysterious Garden.  I enjoyed them all and my daughter loves them!

Princess Hope and the Hidden Treasure is based on Mathew 13:44-45, the oldest princess sister finds her grandmothers missing ring for sale at a local jeweler.  The price of the ring was too high for even the princess but Princess Hope finds a way to make money.  She sacrifices everything she owns and tries to sell it to make enough money to buy back the family heirloom.  Get the story to find out if she makes enough money and what the Princess's find out about their Grandmother.  Also look on the last page for scripture reference to the Biblical Parable.  :) My daughter thought this story was very neat.  She had just had a lemonade stand to raise money for a cause so she related it a bit similar to that but I had to tell her how much this princess gave away.  It was a great teaching story.

Princess Charity's Courageous Heart is the charming retelling of the Good Samaritan story.  Princess Charity has always been the adventurous sister.  So while out horseback riding one day, she witnesses an accident.  Will the courageous princess defy her father's orders to save an injured young boy?  I liked this story because we could read this along with another story about the Good Samaritan and compare the similarities and differences we found.  :)  My daughter thought Princes Charity was very brave and really admired it!


Princess Faith's Mysterious Garden introduces readers of the series to Faith, the thoughtful sister who discovers an abandoned garden within the castle walls.  Determined to restore the gardens beauty, she enlists her sisters to risk getting dirty by digging and planting.  But each time the garden begins to bloom, problems arise-menacing crows, the blistering sun, or a violent storm.  True to her name, and as told in Matthew 12:1-23, Princess Faith learns that hard work and trust in God brings rewards.  This story is a really fun one but I had to explain the Biblical story behind it because it was a little confusing for my four year old.  After she got it she loved it!  Our garden has had its ups and downs and currently it is not doing too well.  :(  The dry dry heat we have had has taken a toll but this book lead us to pray and trust that our garden still has hope.  :)

About the Authors:
After 20 years as a corporate event planner, Jeanna Stolle Young was inspired to develop the Princess Parables series, which is her first set of published books.  With two princesses of her own, she understands the need to have role models for them to look up to with character and depth.  She is a speaker with mom Heart Ministries at, Mariners Church in California.

Jacqueline Johnson is a former tribal missionary to the Kuna Indians on the Columbia border in Central America.  She is the co-author of the first two books int eh Princess Parables series, Princess Grace and the Little Kitten and Princess Joy's Birthday Blessings.  Fluent in several languages she and her husband pastor in a Spanish speaking church in southern California.  She is the mother of two grown daughters and the grandmother of three princesses and four young princes.

About the Illustrator:
Omar Aranda studied fine arts in  Buenos Aires, Argentina, where he was born.  He started his career as an artistic painter, but now devotes all of his time to illustrations for children books.  He is the illustrator of the JackoWhisp Series of picture books for children.