Posted by Praises from a Wife and Mommy! on August 29, 2012
The leaves may already be starting to turn but the ants are still coming out in full force.  I remember a couple weeks ago finding a whole trail of baby ants!  IT WAS GROSS, I followed the trail killing each one trying to locate the start.  Found them in my cupboard where I cleaned for the next half hour so there were ZERO ants in there.

Now my house has the Combat Ant baits out around the house to protect long tern with continuous control.  I also now am stocked with the Combat ant gel to kill ants NOW! 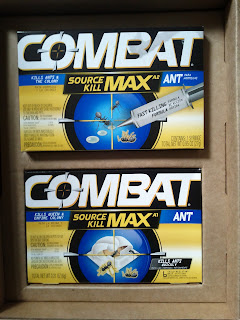 So what is the difference between the gel and the bait?


Combat Source Kill Max Ant Gel:
This product is formulated to effectively control ants.  That's because this product contains fipronil, a fast acting active ingredient.  Its speed is still slow enough,however for foraging ants to return to the colony and feed the bait to larvae and queens so that the entire colony is killed through the Domino Effect.
-First specially formulated ant gel
-Preferred food form for ants
-Fast killing formula
-Works within hours and up to 1 month
-Kills ants and the colony

Combat Source Kill Max Ant Bait:
This product contains an effective insecticide which kills most ants commonly found in homes.  This product is effective because ants carry bait back to where they live to destroy the entire colony.  It even kills ants outside to prevent more ants from coming inside.
-Kills ants without messy residue and without insecticide odors
-quick kill formula
-destroys the queen and the entire colony
-provides long lasting ant killing power
- Child-Resistant

Since I have children I prefer the baits so I don't have to worry about anyone getting in the gels.

Combat Bug also has a Free Backyard Bash Sweepstakes going on!  They want to giveaway $1000 to 1 lucky winner.  The winner will also receive an assortment of Combat brand product to ensure ants don't spoil their bash.  Just click HERE to go enter!  IT IS VERY EASY! Now is the time to get rid of ants and enter a fun contest!

Time to enter to win some!  Use the easy rafflecopter form below.
a Rafflecopter giveaway

Unknown said…
I like the bears hugging, I actually thought it was apenguin till I looked closer
August 30, 2012 at 11:47 PM