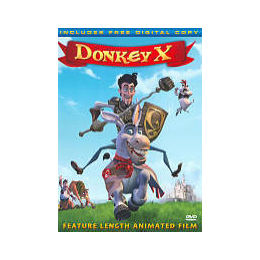 Donkey X DVD Review
Based on the 400 year old Spansih classic tale " Don Quijote de la Mancha," DonkeyX, releasing in July 2012, follows Rucio, the most adventurous, brave and mischievous Doneky of Castile, as he tells the true story of the legendary Don Quijote.  Rucio Jumps at the opportunity to join Don Quixote on his quest to battle The Half Moon Knight and overcome the dangerous obstacles that lurk them on the way.
This new animation takes on Don Quixote.  If you have not seen Don Quixote then make sure you watch that first or you will be lost in this story.  Donkey X is rated G and runs about 90 minutes.  I think kids a bit older will enjoy the film more.  My 4 year still did enjoy it but I know she had no idea what was going on within the plot.  She lost interest a few times and started playing but then a few minutes later it caught her attention again.
There is some adult humor that for the most part was clean.  It was also neat to see some Christian aspects within the movie such as praying.  :)
There is some minor language issues and I wish the girls would cover up their chests a bit more... this is an animation so why so much cleavage.  (Sorry just had to say that)
This DVD can be purchased at Redbox, Target, Walmart, and Amazon.com