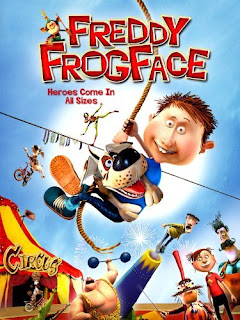 Freddy Frogface is a Phase 4 film and was released in July of 2012.  it is rated PG and is approximately 85 minutes long. The story is about 10-year old Victor and his friends, who not only have to face a world full of stern grown ups but also the town bully, Freddy Frogface.  (He actually ate a frog to earn that name title?) When a circus comes to the sleepy little town, Victor is thrilled at having the chance to perform in a talent show with his dog Sausage.  Yet Freddy soon comes up with a sinister plot of his own to spoil Victor's plans.  You can find Freddy Frogface at Redbox locations, Target, Walmart, Amazon.com.


My Review:
I asked my daughter what she thought of the movie, in her words "Freddy is not nice!"   The main thing she picked up from this movie is how nasty this bully acted and she picked up on that very early in the DVD.

The movie did lose her attention after about the 45 minute mark.  I found her playing and not paying attention to the movie any longer, which is very uncommon for my daughter.

I also was not a fan of the nasty remarks, icky talking, and rude behaviors that are simply annoying that the movie had.  I try to keep teaching my daughter not to use words and actions like that and it gets frustrating when movies use slang or annoying actions and teaches them to do it.  I am not recommending this movie, I just don't feel it is very family friendly.  I thought about turning it off but decided to finish watching for the review since my daughter was no longer watching.  On a positive note there was some redemption and forgiveness given to Freddy so that is great and could be discussed.

Since bullying is a big issue in schools and my almost 5 year old is starting 4K in a couple weeks I took the opportunity to talk about bullying.  We discussed why people do it and how to avoid it and what to do if she gets bullied.

stlavonlady said…
This weekend we were going to rent this movie. It sounds like we were lucky they were out if it. It is frustrating when there are so many shows and movies out there where the language and content is just not appropriate. Personally, I want to keep my daughter a little girl as long as possible and the media just doesn't help sometimes.

Glad I came across your review. I think we will be doing another activity and not renting that move.

Have a good night!