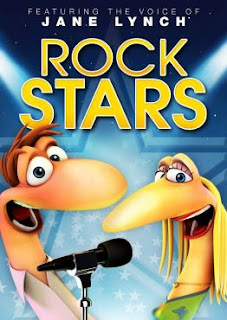 "Rock Stars" was released August of 2012 and can be found at Redbox locations, Target, Walmart, and Amazon.com.  It is rated PG and runs about 78 minutes.  This move features the voices of Glee's Jane Lynch and is nominated for the Robert Award of Best Children/family film of 2012.  In the film, viewers learn that it's not easy being a lowly earthworm.  Gloria and Barry live at the bottom of the food chain.  But one day an old disco record turns Barry's life upside down as he decides to make the worlds' greatest disco band.  Gloria Joins in on the fun and rises to stardom as a singing sensation.  They have no arms and no rhythm, but earthworms can boogie too!
My Review:
I truly enjoyed this animated kids movie.  I don't ever recall watching a movie that star worms for characters.  Who would have ever thought a worm being so vibrant when they don't have feet or arms.  The movement of the worms was very great to watch!
After watching the Olympics this movie has a great theme of never giving up which is inspiring and matched the Olympic theme.  :) It is so easy to get frustrated in the world today because so many people smash your dreams.  Barry had so many people try to smash his but his passion for Disco would not die.
My daughter had fun watching and giggling throughout the movie.  :)