About the Movie:
Smitty was released in July 2012 and stars Peter Fonda, Mira Sorvino and Louis Gossett Jr., the movie tells the story of thirteen year old Ben and his struggling, single mother who has had enough of her son's mischief. Ben is sent to spend the summer in Iowa on a farm with his estranged grandfather, Jack. To help Ben make a friend, Jack gets him a smart farm dog from an animal shelter to keep Ben company and in line. Between the dog and a friendly neighbor, Ben soon learns life lessons about friendship, family and responsibility. Smitty is rated PG and can be found at Redbox locations, Target, Wal-Mart, and Amazon.com. 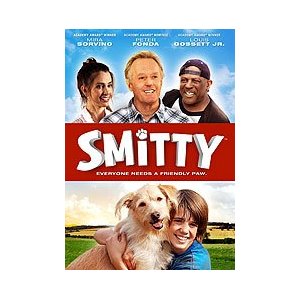 My review:
To be honest through out the movie I kept thinking I have seen this movie before, which I have not but the story line is so similar to many movies I have seen.  So it might be a bit predictable but it was still a fun movie to watch.  I suggest the age perfect for this movie would be 8-12 year-olds.  There is some violence and a lot of rude behavior so if you don't want your younger children to see this be aware.  My daughter still watched at 4 and we discussed all the naughty behaviors during the movie.

I think the biggest thing I liked about this movie is the restoration and redemption that occurred between Grandpa and Mom.  No contact for 13 years is sad but how awesome that they were reunited and that a new relationship will stay- TRUE FORGIVENESS!  YAY

I also really enjoyed the judges punishment- I think it should happen more often.  (Instead of Juvenile hall she made him spend 3 months with his grandpa)  The only problem with this punishment is not all Grandpa's will care and teach as much as this one did.