By Praises from a Wife and Mommy! September 09, 2012
Do you have the big foam letter puzzle??   I am so thankful to have them because we use them for so many  fun activities.  Here is another alphabet lesson that my daughter and I did last year. 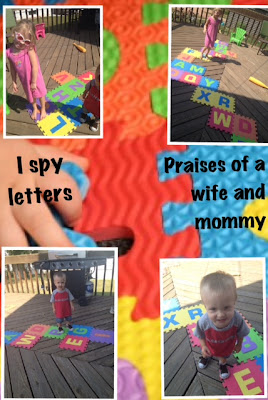 For this activity I let my daughter put the letter pieces where ever she wanted.  She thought she was just making a really big hop scotch game.  I did let her play some hop scotch but then we also did "I Spy."   I really wanted to see how well my daughter would recall her letters when the letters were not in order.  I was happy how she recalled her letters.  :)
If you have never played "I spy" then let me share it.  I would say, "I spy with my little eye the letter B"  I would then allow her to find it but if I noticed her searching I would sometimes give her a clue to help find it faster, "I spy the letter B and it is the color purple."
We also did some color jumping.  :)  "Jump on the color red 6 times."  The change the color and the number of times you jump or the action.  You can use actions such as jumping jacks, leg kicks, or even a burpee.  :)