along with friend Mary Wheeler Settlemier.
All three are mothers who have nine children between them.


Our very first product to hit the market was conceptualized in December of 2003 while Dr. Bloom was sitting on the floor (seven months pregnant) playing with her twin nephews. As they were playing, she realized that they were drooling and teething on her jewelry. Being a senior in dental school, Dr. Bloom was concerned about their developing/erupting teeth because they were literally chomping and chewing on her glass beaded bracelet and necklace charm.
As a soon to be dentist, she quickly informed her sister that chewing on glass beads and metal may be dangerous to developing tooth buds. Her sister then told her “that is why new moms don’t wear jewelry, because babies chew on anything they can get their hands and mouth on”. After that, the search was on to find a material suitable for a teething baby. They searched baby stores, toy stores, and the Internet and came up empty.
Intrigued by the idea, Dr. Bloom continued to research the concept of jewelry designed for moms and safe for babies & toddlers. She realized this concept did not exist. As a mother of a two month old, she then designed and prototyped the first bracelet as a gift for her sister.
In July of 2004, while attending a wedding, she offered bracelets to her son and two nephews
All three boys loved them and stayed quiet for over an hour
(a dream come true for any parent). This was the “A-ha” moment.
She knew this would be a product she would love to have as well as her friends, family and other new moms.
She immediately set out in search of the material for her product and realized, through research and development that most teethers are made of plastics that leach harmful carcinogenic chemicals. It was then that she realized how important it was to produce a product that was not only utilitarian and fashionable, but also safe. 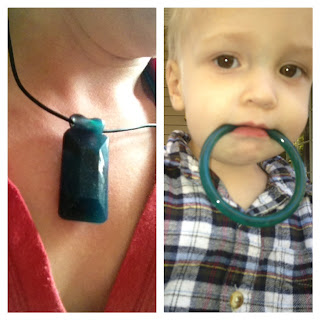 Thank you to Chewable Jewels for sending me product to review and to the winner of the giveaway.  I was not paid for this review and all opinions are 100% mine.

I loved that these are not made with icky chemicals and are dishwasher safe!  Immediately my son did put the bracelet in his mouth and was chewing on it. It was perfect timing to receive these items for review because my son has been working on his eye teeth.

I also think the size of the bracelet teether is small so babies will be able to hold.  So many teethers are think and hard for little hands to hold.

The necklace is a very neat feature for moms with infants but my lil toddler had no interest in it.  I think because he has learned that, "you don't touch mommy's jewelry."

For each of my readers you can get 20% off your order from Dr. Blooms Chewable Jewels by using code: 2012F Go order yours today!


Enter to win some Chewable Jewels-

I really enjoyed this visual for Color Street Application!   So far Nail it With Selah and April is going great!  We are eager to help you get your nails pretty or sparkly or both!  If we can do it then that means anyone can do it!   Look at the fun Easter Colors!!!!  Which one is your favorite?  Chicks or bunnies? Check all the other designs here!
Read more