Thank-you Little Green Pouch for sending me your product to conduct my review.  I was not paid for this review and all opinions are 100% mine. 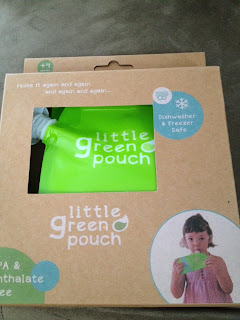 The Story behind Little Green Pouch:
"With Maggie’s first son, Kelley, trips to the grocery store were definitely on her “dread” list. When she had her second son, Finnegan, aka the Finn-A-Monster, it moved to the top of that list. But then Maggie’s grocery store began stocking those food pouches you've probably seen.
On one particular visit, after substantial clamoring, Maggie caved and popped the tops of two pouches. A miracle ensued - she watched in amazement as her boys sat quietly in the cart, working out ounces of healthy fruits and veggies, which they wouldn’t dare eat out of a bowl. Never missing an opportunity, she sped through the remaining grocery store aisles in relative peace. By the time the shriveled pouches moved along the conveyor belt to checkout (yes, she paid for them) Maggie realized that she had all of the items on her shopping list, and when was the last time she had done that? Someone’s new product had just made her life easier, and she was in love.
But Maggie’s romance with food pouches was short lived. Yes, she loved the fact that her kids could feed themselves, that they would actually be clean after doing so and that she didn’t have to lug around spoons, bibs, bowls, napkins and breakable jars. But she found that the pouches were expensive and offered a limited variety of foods. And she cringed each time she had to throw the single-use packages in the trash. That is when she realized the world needed a “reusable” food pouch that could be filled with the foods her kids like (or she wants them to like), which would help her save money, as well as the planet. Not a bad idea, right?
But an idea is just an idea until you make it happen, so Maggie reached out to her close friend (designer and recent new mom of baby Bailey) Melissa to help. Maggie and Melissa realized that they wanted a product that wasn’t just practical, but that was also, well, beautiful. Something they'd be proud to whip out at the playground, park or store. Even something they'd eat out of themselves. After several planning sessions, Maggie and Melissa realized that they had the perfect team to make this a reality. And the Little Green Pouch was born.
The Little Green Pouch has made Maggie and Melissa’s lives easier, and they think it can do the same for you. Perhaps it will even allow you to buy all of the fruits and veggies on your list during your next shopping trip. (And puree them of course.)"

My Review:
Let me start by telling you the facts about this handy tool for moms.
1. Easy to fill- The zipper seal at the top is easy to open and close so adding your food is easy.
2. Dishwasher Safe-  If your like me then you are always looking to see if you will buy an item on this fact.  Hand washing is something I dislike!
3. Reusable-  I love that this product can be used over and over again.  It also is durable, BPA free, PVC free, and Phthalate free.
4. Freeze-able- I wish I had this when my son was still on baby food!  It is a cool feature to have since my daughter will start full day school next year so I can freeze and item in the Pouch and then it will still be cold when she eats her lunch.  :)
5. Squeeze-able- Eating from a pouch that is squeezable was very easy for my almost 2 year old and 5 year old.  No mess!  :) 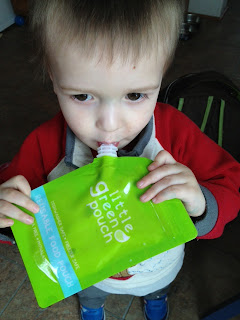 The first thing we put in our pouch was yogurt and at first I was just going to give it to my son my 5 year old daughter was very interested and wanted her own too.  Thankfully Little Green Pouch is sold in 4 packs so they each can have their own.  Both kids gobbled up their food without a mess!  YAY!  The next task is to try to get them to eat some veggies out of it.  :)
I washed my in the dishwasher and was happy at the clean result.  I truly believe this easy to use pouch will save you money, and help the environment so we aren't creating more trash.

Since I received a 4 pack I gave a couple of my pouches to my friend who has a younger baby then mine to find out what she thought of it.  Here are some of her thoughts:
"My daughter is 9 months old and in an in between baby food and solids stage, so we are doing a lot of experimenting with food! She takes FOREVER to eat and gets distracted by all the activity around her! I first used the pouch with a jar of stage 2 baby food. I did need to hold it for her (but she doesn't hold a bottle yet so I expected that), but she ate very quickly and easily! We made a little mess at first, but once she figure out what was going on, she sucked all the baby food right out of it! I rinsed it out right away and stuck in the dishwasher and it was very easy to wash. My husband also tried it out and found it very easy to use. I finally put some diced apples in it at snack time and that worked ok. As long as they were soft and not large pieces it worked out really well. If the pieces were to large, they would get stuck and then I would shoot a whole bunch out at once! This would be very helpful when I am out running errands and have to feed her on the go! Once opened, putting the cap on seals it much quicker and easier than a baby food jar and has no leaking which baby food jars frequently do!" 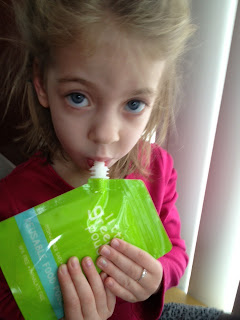 Emi said…
I make my own applesauce in the crockpot. With apples at about 75 cents per pound it is cheaper than buying the jars.
February 27, 2013 at 6:22 AM

Unknown said…
It's Strawberry Festival time here in FL, so it would be Strawberry Applesauce.
March 4, 2013 at 3:49 PM