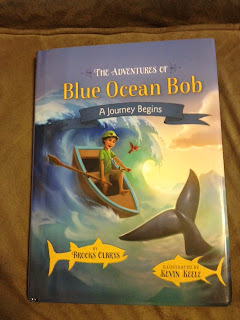 Book Description:
Despite his idyllic island life, young Bob yearns for a greater sense of fulfillment. With his guardian, Xena the hummingbird, at his side, Bob sets out to seek guidance from the wise and happy creatures of the sea.

From the joyful secrets of Al the dolphin to the insightful advice of Doc the turtle, Earl the clam, and Wallace the walrus, Bob uncovers great wisdom. But to complete his journey, he'll need to overcome his fears - and Xena's doubts - and prove himself to Mary Marine, the Island of Roses's leading marine biologist.
The Adventures of Blue Ocean Bob: A Journey Begins is the first episode of a colorful, early chapter book series that provides children with an introduction to timeless principles of achievement derived from the teachings of Bob Proctor, Earl Nightingale, Napoleon Hill, Wallace D. Wattles, and others.

About the Authors/Illustrator:
Brooks Olbrys
As a lifelong student of achievement philosophies, Brooks Olbrys was inspired by his young son to make these philosophies accessible to children. With encouragement from best-selling author and personal development coach Bob Proctor, Brooks created the children's book series, The Adventures of Blue Ocean Bob.
A graduate of Stanford University, the Fletcher School of Law and Diplomacy at Tufts, and the University of California at Berkeley School of Law, Brooks is the founder of Children's Success Unlimited and a managing director at investment bank Ion Partners. He lives with his wife and son in New York City and greatly enjoys escapes to the North and South American coastlines.
Kevin Keele (illustrator of A Journey Begins chapter book)
From a young age, Kevin Keele has enjoyed creating artwork in many forms: drawing, oil painting, digital painting, even stained glass. His work has been featured in numerous picture books, magazines, board games, and video games. Though he lives far from any coastlines, he has always been fascinated by the ocean and enjoys illustrating its various creatures.
Kevin is currently an artist for Disney Interactive Studios. He lives in Utah with his wife and two sons. They're the caretakers of one grouchy cat, three chickens, and thousands of Italian honeybees.

My Review:
Blue Ocean Bob is a unique chapter book that includes great illustrations and rhyming.  The main idea is setting goals and achieving them, which is a great tool for every day life.  Most children will be able to read this story and feel inspired to dream and reach for the stars.

I could not help but want to tell Bob about Jesus through most of the story.  Most of you know my faith is very important to me and even through Children's stories I want my Faith in Jesus to shine.  Bob was seeking guidance and direction from the sea creatures which is cute but I truly want my children to always Trust Jesus before anyone or anything else.

This book is still a great book but make sure you talk to your kids about the dreams and visions that Jesus gives us.  Through Christ we can accomplish so much more, a value I want to teach my children.

My son is a bit young to listen to the story but my 5 year old daughter is enjoying the rhyming and the fun character Bob.


Disclosure Statement: I received a promotional copy of this book in exchange for an honest review.