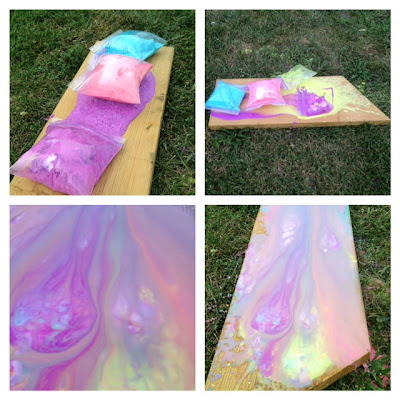 Your kids will be asking to do this again and again!
Here is what you need:
Vinegar
Corn Starch
Food Coloring
paper towel
Baking Soda
Zip Lock Bags

I added vinegar and corn starch to the bag and dropped the food coloring in to get the desired color. I did not do any measuring just estimated.  Then I took a piece of paper towel and tore it to a smaller piece and added Baking Soda to the paper towel and wrapped it up.  The paper towel with Baking Soda is sort of like your ammo- it causes the reaction.

Once outside I put the paper towel in the bag and zipped it closed and we watched the reaction take place.  Some of the bags took some time since I did not measure the baking soda.

The pink bag took the longest to pop but it was quite a show to watch how huge the bag expanded.

We did this activity a few weeks ago but my daughter has been asking to do it again.

I also had it on old lumber and grass since I used food coloring and not a tempra paint.  I have fear of it staining the sidewalk. 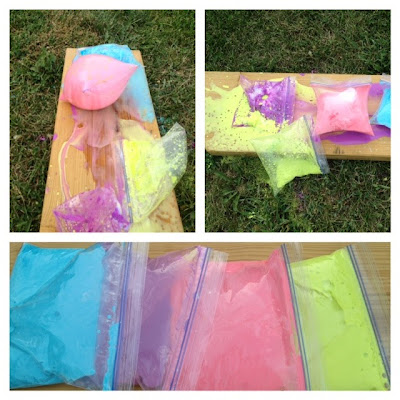