By Praises from a Wife and Mommy! August 10, 2014
Were you loving every nail biting moment of the 2014 FIFA World Cup tournament? If so, check out Defending the Line: The David Luiz Story to read all about the life, faith, and soccer career of our favorite World Cup player!  David Luiz is an inspiration on and off the soccer field! 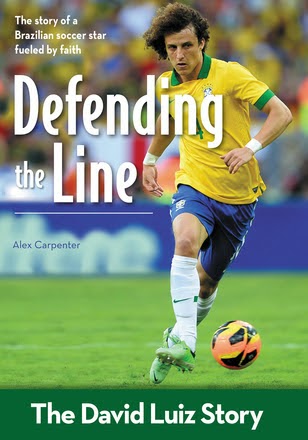 About the Book:
'Everything in life belongs to God. Our purpose has already been mapped out.' ---David Luiz One of the rising stars in international soccer, David Luiz has been impressing crowds since he was a boy. But it is his faith, not his fame, that drives him to greater success and keeps him “defending the goal.” David made his debut in professional soccer as a left fullback when he was just 19. He was then picked up by Portugal’s Benfica team and named player of the year for the 2009-2010 season. As a star defender and vice-captain for the Brazilian National team, David shines both on and off the field, inspiring athletes around the world with his incredible soccer skills and his unwavering faith. David currently plays for England’s Chelsea Football Club, one of the premier club teams in the world, and he is expected to play for Brazil in the 2014 World Cup.

My Review:
I am going to be honest and tell you that I am not really a soccer fan... I mean I have nothing against it I just never saw much of it growing up.   The reason I wanted to read this book is because I love to find athletes who use their God given talent to bring Glory to God.  :)  I was inspired in this easy to read story.   The ages are perfect for 8-12 year olds which is the perfect time for them to find good christian role models before the world shows them other role models.

I am excited that in a few years my son can read this book and be inspired!