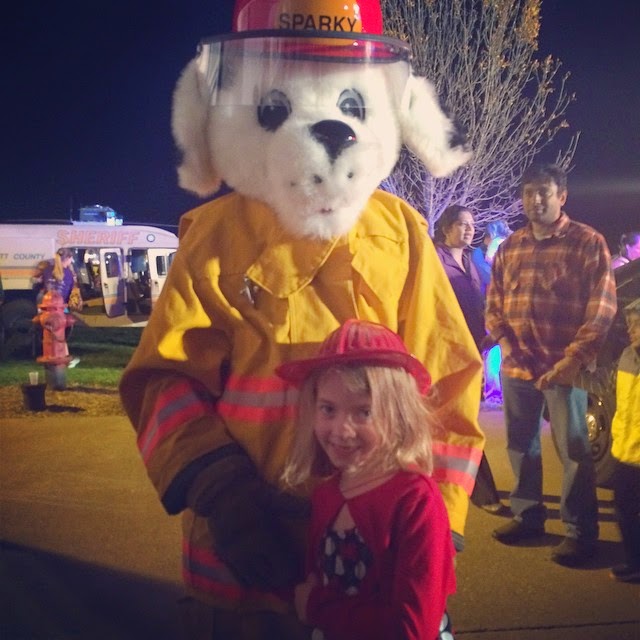 Anyone remember me telling you my kids have a fear of anything in a costume?   I mean a real fear with shaking, crying, and screaming involved? We go out of our way all the time to avoid anything in a costume.   I have two kids immediately hiding behind me if there is any costumed person aproaching in a parade.  We even almost missed a friends birthday party because my daughter was so afraid of Chuck E at Chuck E Cheese but I convinced her to go but she left the area when Chuck E came out.

Last week we went to our local fire station for fire safety awareness night and at the beginning of the night she was her normal self and avoided the Sparky the fire dog.   Then as we were waiting in line and she was kind of hiding behind me when Sparky approached but as she watched her friend interact with him she all of a sudden burst forth with a new trust and no fear attitude and hugged Sparky!   Quite literally I paused with my mouth hanging open unable to move as I processed what I was watching!  I did make my daughter hug again so I could snap a picture to remind me of this awesome day where BOLDNESS and TRUST were displayed!   Now to get my son on that same level...it took my daughter till she was 7 and my son is 3 so we shall wait and see.

What are your kids afraid of?