Book Review: Conrad and the Cowgirl Next Door 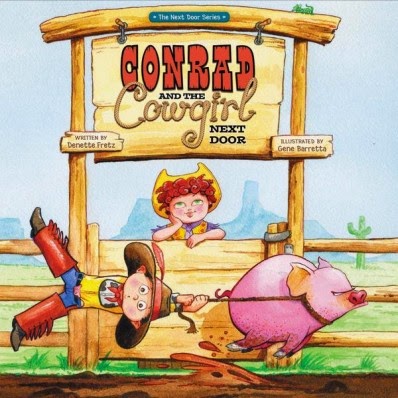 Conrad and the Cowgirl Next Door, written by Denette Fretz and illustrated by Gene Barretta, tells the tale of a city slicker named Conrad whose biggest challenge during his summer of cowboy training is the know-it-all cowgirl next door.

“I hear that becoming a cowboy can be dangerous. Especially if you don't know the rules.
I don’t know the rules.”
It’s a good thing Conrad brought his Mega Ultimate Extreme First Aid Kit to Uncle Clint’s ranch because learning how to be a cowboy turns out to be a lot harder—and more painful—than he thought. Conrad has a lot to learn – including don’t squat with spurs on and never wave your red sweatshirt at a bull. But the biggest challenge of all is dealing with Imogene Louise Lathrup, the know-it-all-cowgirl next door. When Imogene shows up, she is all too happy to point out Conrad’s shortcomings. In this follow-up to their  debut hit Pirates on the Farm, author Denette Fretz and illustrator Gene Barretta team up once again to tell a humorous tale about what it means to love your neighbor.
Author
Denette Fretz's passion is creating imaginative, engaging stories that help children understand and apply biblical principles. A veteran elementary educator, Fretz resides in Medford, Oregon with her husband, two teenage children, a sassy cat, and a spastic Jack-A-Bee.

My Review
Conrad is a lovable character who adds some great humor to the story.   His genuine care for others is a great starting point for discussion as well as forgiving and loving those who hurt us.   Even though Conrad was bullied by the cowgirl he truly chooses to model Christ and help rather then be spiteful or unloving.   I wish the authors would have kept the story going a little bit longer to truly see forgiveness and love.
The ages start at 4 but I think this book would be better for the older group especially if your child doesn't know much about being a cowboy.   Before we could get to the moral of the story we had to talk about what an auction is, how bids are made, and a few other things such as spurs and wrangling.