It was the first real snow fall of the 2014 winter season and when I woke up and saw the conditions I knew it would be a long and slow commute but this girl is from Wisconsin and can handle a little snow driving.

Here was the view from my window before leaving for work.   It is hard to see but it was snowing and very windy. 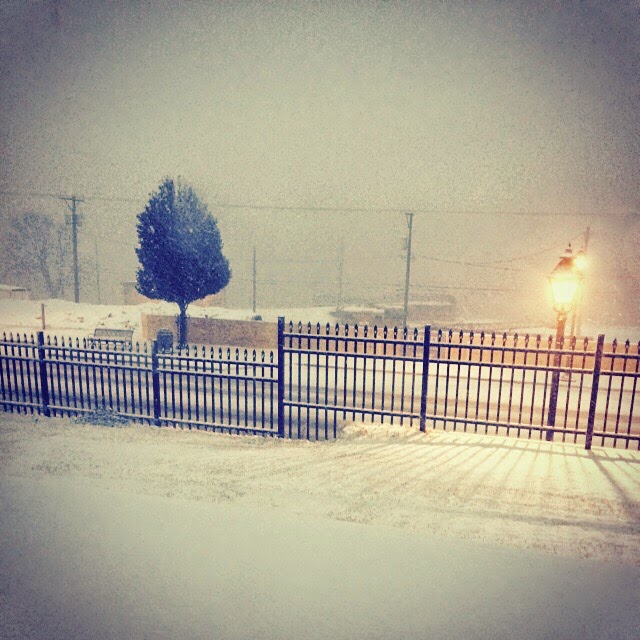 I was driving cautious and at speeds of 30-40 most of the way.   I had to decide what route to go and after debating as I drove I picked the route I thought would be best but sadly that route had me in the ditch. 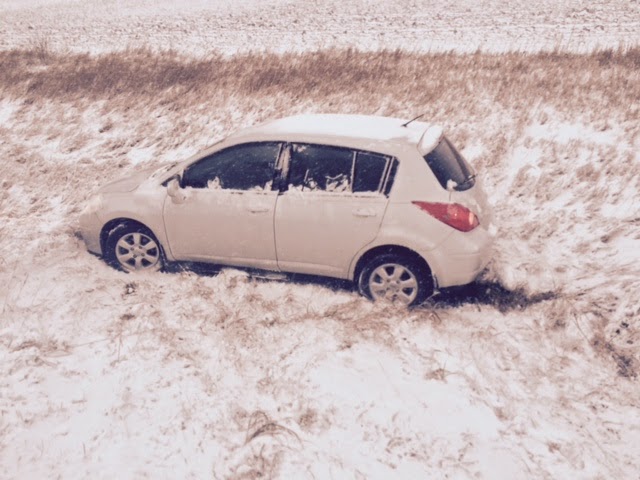 Here I sit in the ditch about 20 minutes from home and all before 8am.  I was going very slow and the slush just pushed me off the road with the help of the wind.   I was very upset!

I immediately called my husband and before long I realized there are a lot of people who do care!   I had car after car stop and several people get out of their car and knock on my window to make sure we were okay.   One nice gentleman gave me some cookies from his own lunch just to give to my son who was with me.  I felt loved and safe.  My husband had filled my gas tank that morning and my phone was fully charged.  An officer came fairly quick and when I told him I was having a hard time finding a tow company open he located one and then it was a waiting game.   We waited for over an hour but once we got out of the ditch I followed the tow truck to go pay him.   After leaving the tow company I thought I might as well get to work and proceeded to drop my son of at daycare.

It became more apparent that the true issue was my tires.   I was trying to get up a very low grade hill and my tires would spin and spin with zero grip and no  forward progress.   I successfully turned around and found a different route to my babysitters house.   I finally made and was ready to get to work but when I went back outside my tires were spinning and I was stuck in the driveway.  I gave up... I was done trying to fight the effort to get to work.

I was very thankful when I contacted my boss again she was understanding and told me to start fresh in the morning.

I also got to spend some more time with a friend who watches my son and I left after lunch before the roads got bad again from ice!

Overall, God truly opened my eyes to the positives on this hard day!   He showed me that strangers can give a helping hand and that everyone around me was understanding!