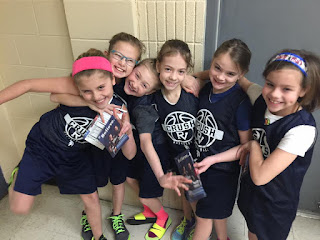 So my daughter is in third grade and joined a basketball team... basketball a sport that has so many elements to learn!   I know I didn't start playing until 6th grade so I knew it was going to be a lot of learning!

So we went to the first game and it started to get ugly... ugly in my daughter's team was struggling and the other team looked like they have been playing for a couple years already.   I literally sat there almost in tears as they continued to struggle.  At the half thy were losing 22-0!   I didn't know where the girls emotions were but I knew I just wanted to cry for them... yes I was hormonal that day.

They got back out for the second half and already they made a huge improvement.   They only allowed the other team two more baskets and they got really close to scoring a basket.

So the first game they ended up losing 26-0!   Remember both teams were third-grade girls!  I was absolutely happy to see them all smiling at the end and saying they still had fun.   IT IS EXACTLY  how I would want them to respond... they still had fun, it didn't matter if they won or lost.

A couple games later we are continuing to show improvements and the girls have finally started to score a few points!

However there was some disgust as I watched an older team finishing their game before my daughters game.   It was a one-point game between some 5th or 6th-grade boys.   The tension was high and both teams were playing to win with a lot of aggression.   The time ran out and two players had some shoving, the ref doesn't see it and one coach starts screaming (foolishly might I add because both players were guilty).   These are boys playing... this behavior should have been dealt with immediately by parents and coaches.  Sadly one coach was just making a stupid show and the other one ignored it like it was no big deal.  It really rubbed me the wrong way... almost to the point that I wanted to walk out there and help parent and coach these kids.   I have realized that after working in a low-income school for awhile I see disrespect and I want to correct it and say something to help put an end to it.

So my lesson... let kids be kids and have fun.  Take the pressure off and help them learn to humbly lose and still have fun.   Help them be a good sport on and off the court.   Help them to push hard for goals but have a balance in life!